Toller Porcorum, a village in the heart of the Dorset Countryside, is nestled in a steep sided valley with strip lynchetts dating back to the Middle Ages. Like the other Toller villages, the name was taken from the river which flows through the valley, the River Hooke, and is known as the valley of the pigs. Pigs were run in the oakwoods by the Brothers at Toller Fratrum, with sightings of wild boar to this day.
The old railway line that used to link the village to Bridport and West Bay runs through the village. It was closed in 1975, but parts of the line are now open to the public and make for lovely walking or cycling. The wooden station building began a second life on the Dart Valley Railway near Totnes. 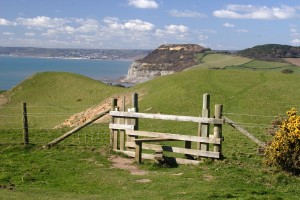 With such idyllic, unspoilt countryside and a dramatic coastline, Dorset offers a beautiful setting for filming. With a strong link to Thomas Hardy, it played a starring role in Far From The Madding Crowd, as well as the TV adaptation of Jane Austin’s Persuasion. More recently West Dorset’s dramatic backdrop of East Cliff at West Bay can be seen in the drama, Broadchurch, with the coastline of Eype and Burton Bradstock close by. Wolf Hall, adapted from Hilary Mantel’s novels, features the local National Trust properties of Montacute House and Barrington Court, both popular destinations with our guests.